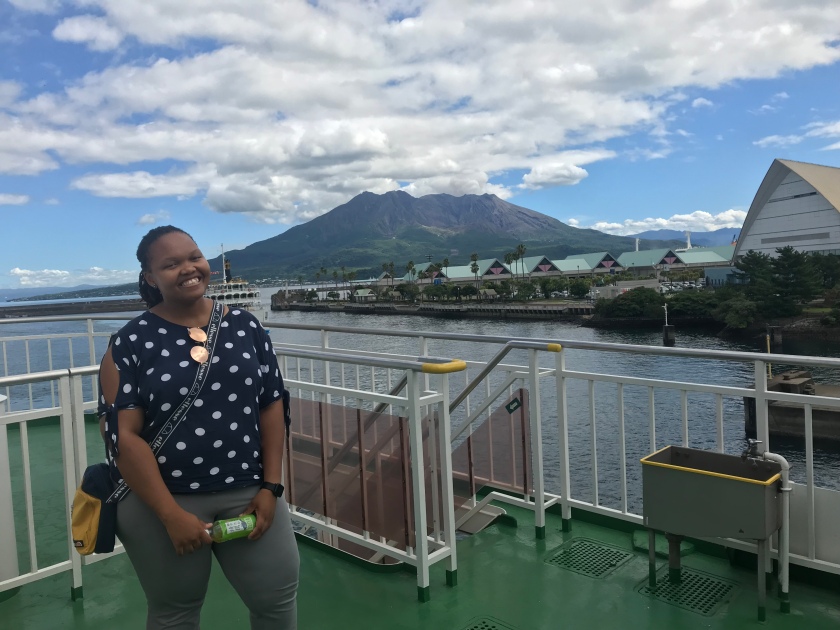 Hey, folks. So at the end of my last post, I made mention of my first solo trip to a far corner of Japan that I’ve never been to (not that I’ve been to many corners of Japan yet as I’ve only been here two months but…). On the back of that trip, I honestly expected to be penning a post about my travel experience and all the sights and sounds I was blessed to experience. But having mulled this long weekend over in my mind, I’ve realised that I received so much more than tourist sights and sounds in Kagoshima city.

As I get older, I find that I am becoming more and more forgetful. So in a way, it was no surprise on Friday evening, as I was making my way to Kagoshima-Chuo Station from Omura, that I somehow managed to lose my train ticket.

I think I was probably 10 minutes into the ride to my final destination when I realised what I had done. Luckily, within seconds of me realising it, a train steward came walking down the aisle. With my 2% Japanese and Google translate, I explained my situation to the man, and he promptly fished out a specialised train-man-translating device. But before he could tell me more about what would need to happen next, the man disappeared back to his station to help passengers who needed to get off the train. In the minutes that followed, I could feel myself dissolving into a pool of stress and anxiety.

“You should have known. The signs were all there. You should have known after Tamara cancelled that this trip was destined to fail. You just like forcing things. The typhoon was clearly a sign that you are going to die on your way to Kagoshima. I mean you missed the damn bus. Jess’s flight got cancelled homie. You’re probably going to get arrested now for trying to steal a train ride. They’ve probably already started the deportation paperwork…”

This went on, over and over, for a solid 15 minutes. Growing up, this negative voice used to be my constant companion. A kind of cautious friend who knew how to keep me safe. As the years have gone on, the relationship has become toxic, taking joy and peace from my life. When my sister-in-law passed away last year, I reflected on this and decided that life was too short to be afraid. It’s okay to make mistakes. I just need to be kinder to myself. I reminded myself of this on that train and almost like magic, as soon as I changed the conversation in my head, the trainman returned with good news: He had asked the people at the station to look for my ticket and they found it. I didn’t need to pay more money. I wasn’t going to get deported. I was going to be okay.

As the most private person I know, I think I noticed this one because as a foreigner in a country that speaks a foreign language to mine; I find that I haven’t had many deep and thoughtful conversations with people lately, something I used to do often, even with stranger’s, back home. It was easier to bottle up personal things when topics like politics and reality TV took up all our conversation time. But now I notice that whenever I find myself with like-minded English speakers, we skip the small talk and just purge ourselves of all our personal thoughts and stories and it’s beautiful because there’s beauty in that kind of intimate release.

Most people who know me have at some point heard me throw around the fact that I struggle with control issues. I’ve been working on this for a few years now, and I’m finally at a place where I’m okay with not having a plan. I arrived at Kagoshima with the Rugby as my only plan. A small part of me felt bad about this because I felt like a bit of a burden to my host by not knowing where I wanted to go or what I wanted to do. Fortunately, the best thing about visiting someone who is also new to an area is that you can go anywhere and they’ll be okay with it cause they are also getting to explore. So that’s exactly what we did, we wondered around Kagoshima, met up with a few fellow ALT’s, and ended up having a better time than either of us could have planned.

This one isn’t exactly new but at each new crossroads of my faith journey, I feel like I can add a new notch to this belt. Sometimes it’s hard for me to explain but honestly, when people ask me why I came to Japan, all I really want to say is “Because God.” Unfortunately not very many people would understand. Heck, sometimes I don’t understand and I guess that’s why I sometimes struggle with living in my purpose while I am here.

My friend who opened her home to me in Kagoshima is Muslim and I am a Christian but for some reason, our 2 am chat’s ended up revolving around our respective relationships with God. In a way, this chat pushed me closer to God and I won’t lie, a part of me is surprised about this because as Christians we’ve always been discouraged to engage in religious conversation with people of different faiths lest they succeed at converting us to their beliefs. It’s never explicitly said, but I always feel it in the way we as Christians engage others, how defensive we become about our beliefs and even sometimes how aggressively we try to push our own faith onto others. I liked that our conversation had nothing to do with “selling” our faith to each other, but rather that it was just two people sharing their feelings and reality about where they currently find themselves in their faith journey. I guess it’s kind of nice sometimes to just listen and to be listened to. I miss my intimate relationship with God but I use the word faithful to describe myself right now because this weekend; I realised my hearts’ intention. I’m still here, showing up, even in a time that I would describe as silent. I’m still here.

Perhaps what I’ve considered my biggest strength in this life, is my ability to make friends easily. You might have noticed in my internal train monologue that a lot happened leading up to this trip. I made some really close connections leading up to my time in Japan, and this was going to be a mini-reunion of sorts after our time Tokyo. So originally we were meant to be 4 people meeting up but by the time that the weekend came around, it was just me and my host, and the reality was that we didn’t know each other from a bar of soap. Even though I’m great at making friends, I really prefer to get to know a person before trusting them with so much of myself.

Unfortunately, or maybe fortunately, the wonder of the JET Programme is that you might meet someone today and never think much of it but because of how small the community is, you end up meeting again later down the line because they are a friend of a friend and now you’re sleeping over because that’s what you do when you plan an impromptu girls trip to Kagoshima. This was the situation with Nabeela. I think we literally spoke two words to each other at Tokyo Orientation so I barely even considered us acquaintances leading up to this weekend. Despite my conscerns, I got on that bus, knowing I was going to be spending 4 days with a stranger and man, am I glad I did.

Nabeela is great, and even though I chose the word lovable, I’d like to dedicate this word to her for just being a great human being. Even as we met up with a few of her Kagoshima friends along the way, at no point did I feel like an outsider. It was like hanging out with an old friend. I can confidently say that we didn’t make the best of a bad situation, the bad situation brought out the best in us.

Invite your friends to have a read

I'm a writer with some stuff on my mind. View All Posts